Our family-run business operates a fleet of
over 1,700 in-house units, with drivers that
have been trained to the latest
industry standards.

Take a look below to learn more about our company. 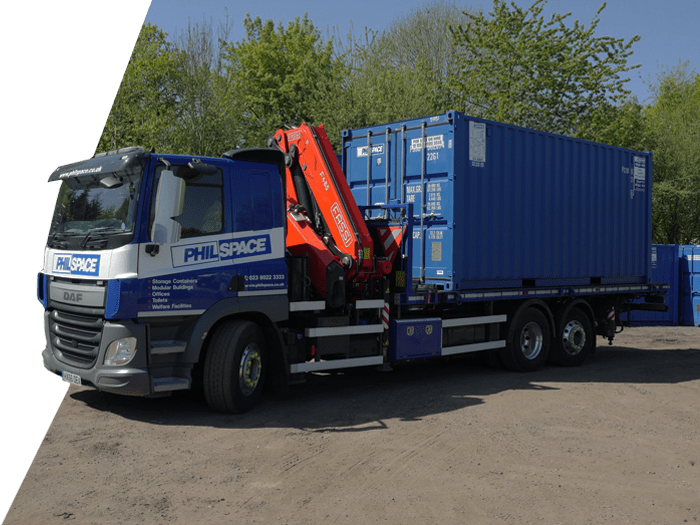 WHERE DID IT ALL START?

Gordon Philip first founded Rigfone Electrics in 1963 at the age of 52. He retired 10 years later leaving his two sons, Peter and Nigel, to run the company.

In 1975, purely as a hobby in his retirement, Gordon, together with a business partner, started buying, selling and hiring ex shipping containers, under the company name of PG Philip General Engineering Ltd.

As time progressed the partner was bought out and Nigel and Gordon created the foundation of the trading company and in 1985 renamed it as Philspace Limited, now totally owned by the family.

The potential of the company was not difficult to see so Peter and Nigel did a management earn out with Rigfone Electrics, enabling them to put all their efforts into developing Philspace Ltd.

In 2015 Nigel’s son, Tim, became a Director and is now responsible for running the company on a day to day basis.

Despite all these great achievements, none of it would have been possible without the hard work of our 25 members of staff and their dedicated on-going support.

Now with over 54 years of business experience, Philspace Limited has become one of the South’s leading suppliers of temporary and portable site accommodation. With the drive to retain our position as market leaders, we are always keeping up with the latest industry trends, whilst investing in our fleet to ensure reliability and that we meet the latest environmental regulations.

The combined results of experience, youth and enthusiasm is the company you see today, still based on the standards set by Gordon Philip, now passed down to three generations.

We strive to always provide a good product, an impeccable service, with never a borrower or a lender in sight.

As part of our continued commitment to customer service and creating long-lasting relationships, you can now find out more about our friendly and experienced team.

Over the years, we’ve worked with organisations of all shapes and sizes. Come and find out what they have to say about working with us.

With so many portable site accommodation options available, there’s a lot to understand. Our FAQs will shed some light on your choices.

The company has become one of the South’s leading suppliers of temporary and portable site accommodation.

With the drive to lead, we are always keeping up with the latest industry trends and investing in our fleet to ensure reliability and we meet the latest Health and Safety regulations.

The result of experience, youth and enthusiasm is the company you see today, based on the standards set by Gordon Philip.